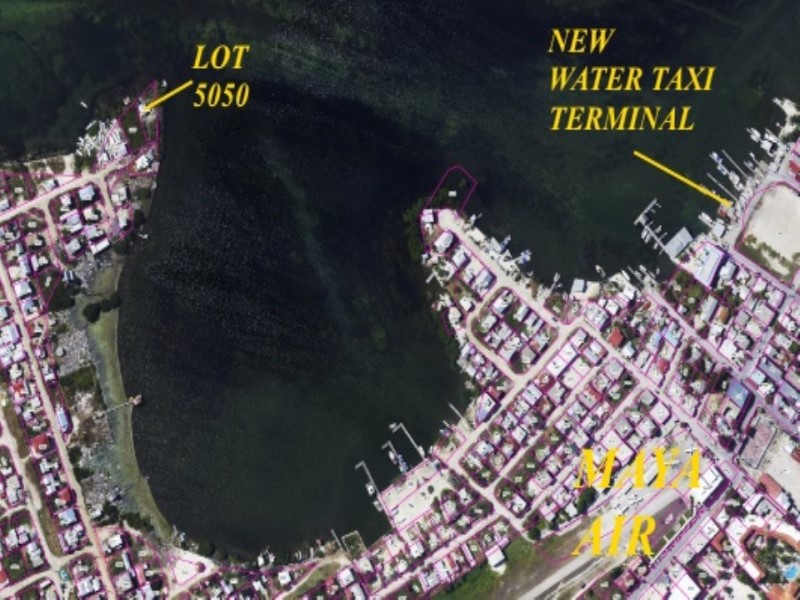 Belize, formerly British Honduras, is located on the Caribbean coast of Central America, with Mexico to the north and Guatemala forming its western border. The whole coast line is protected by a barrier reef while the inner waters are shallow and dotted with numerous islets. As of 2002 Belize's population was 250,000 approx. Its language is English, though many residents speak Spanish.

The Mayan culture reached its height in what is now Belize about 1500 years ago, and many ruins of their temples, stelae and hieroglyphics still exist.

Among the earliest are the ceremonial buildings in the Corozal area, in the northernmost district, across the Bay of Chetumal from Yucatan. Consejo Shores is a retirement and vacation spot for Americans, Canadians, Europeans and Belizeans. Thirty-five miles to the Southeast is Ambergris Caye and the barrier reef, the second longest in the world, and teeming with tropical fish. It is perhaps the most productive fishing and diving area in the Western Hemisphere.

On September 21, 1981, Belize became a fully independent nation which remains a member of the British Commonwealth. The Government is a parliamentary democracy based on the Westminister model, with a House of Representatives, Senate and Prime Minister as head of state. The laws of Belize are based on the British legal system and its Common Law tradition.

Belize has an area of 8,866 square miles, about the size of Massachusetts, and a population of only 320,000. By air, Belize is about two hours from Miami or Houston. Driving through Mexico from Texas takes about four days.

Belize is a true multiethnic, multicultural society. About 30 percent of Belizeans are Mestizos, persons of mixed Indian and European heritage, most originally from neighboring Latin countries and most living in northern and western Belize. Twenty percent are Creoles, of mixed African and European descent, concentrated in and around Belize City. Ten percent are Maya, and another 10 percent are Garifuna, of mixed African and Carib Indian. The Garifuna live mainly in southern Belize along the coast. Kek'chi and Yucatec Maya are in southern, western and northern Belize. The rest are Americans, Europeans and other Anglos, plus Chinese, East Indians and others.

Belize is a stable democracy, a member of the British Commonwealth with an English common-law tradition. The country - formerly British Honduras - has been independent since 1971. The Westminster-style system has a prime minister, an elected house of representatives and an appointed senate. The current prime minister is Said Musa, a British-educated lawyer of Palestinian and Belizean heritage. He heads the People's United Party, which swept the last national elections in 1998. The main opposition party is the United Democratic Party. The two parties are centrist, and their policies and ideologies are not very different, but Belize politics are often intensely personal. Everyone seems to know everyone else, and party loyalties are rewarded and remembered.

Belize continues to maintain strong ties to both the United Kingdom, as a member of the Commonwealth, and to the English-speaking Caribbean, as a signatory member of CARICOM. Belize is a constitutional monarchy, with the British sovereign as Head of State. Executive authority is vested in the sovereign and is exercised by the Governor General who is appointed on the advice of the Prime Minister. Legislative power is vested in the bicameral National Assembly, comprising a Senate (12 appointed members) and a House of Representatives (29 elected members). Since gaining independence in 1981, Belize has enjoyed a stable, three- branch system of government.

Belize is one of the few countries in the world where English is the official language, and Spanish also is widely spoken. All official government documents, deeds and papers are written in English. If there's a lingua franca in Belize, it's Creole, a mixture of English and other vocabulary and West African grammar and syntax. Garifuna and several Maya languages also are spoken in Belize, and many Belizeans speak two or three languages. There are few countries towards whom we feel a greater degree of respect. Its tiny population is numerically less than many of the world's cities. (Note that while the country of El Salvador consists of approximately the same land area as Belize, El Salvador contains thirty times as many people; with an overall population of almost six million people compared with Belize's 240,000) Yet despite its small population Belize manages to attract the worlds attention for its modern attitudes, stable government and respectful treatment of its indigenous peoples.

The climate of Belize is subtropical, similar to that of South Florida. Daytime temperatures generally are in the 80's most of the year out in the Cayes. In areas of higher altitude, such as the Mountain Pine Ridge and Maya Mountains, winter temperatures may occasionally fall into the high 40s or low 50s. Humidity is high year-round, tempered on the coast and cayes by prevailing breezes from the sea. Rainfall varies from 150-200 inches a year in the far south, feeding lush rain forests and jungle, to 50 inches in the north, about like most of the Southeastern United States.

Belize is in the hurricane belt, but the western Caribbean does not get as many hurricanes as the Southeastern U.S. Atlantic coast or the Gulf coast of Texas. On average, Belize is visited by a hurricane about once every 30 years. Tropical storm and hurricane season in Belize is June through November, with most storms coming late in the season, particularly September through early November.

Belize is beautiful and its people want to keep it that way. The coral in its crystal clear waters is healthy and thriving, 70% of its tropical rain forests are still intact and the interior of the country is full of incredible limestone caves to explore. Native animals range from the jaguar and howler monkey to the manatee, and there are more than 290 species of birds. Every now and then a "norther" from the U.S. brings Belize a couple of cool and windy days in the winter, but only four hurricanes have hit the country in the last 50 years.

Within Belize (and Guatemala, Honduras and Mexico, too), you'll find the ruins of the ancient Mayans, a civilization that developed an alphabet, calendar, complex mathematics and breathtakingly beautiful cities while their European counterparts were still in the Dark Ages. This civilization ended abruptly, however, sometime in the 12th century after flourishing for 800 years. It is now being rediscovered, with archaeologists revising their theories almost daily about how and why the Mayans lived, and died.

But for the boater, the best thing about Belize is the water. The longest barrier reef in the Western Hemisphere runs offshore, letting you reach along inside with 15- to 20-knot wind on a flat sea.

Even the "downside" of boating in Belize - the shallow waters and the lack of perfect charts - has an equally strong upside. You need to charter catamarans, not monohulls, to explore these incredible seas. Catamarans may not go to windward as well as monohulls, but the extra space and the sheer exhilaration of sailing fast - almost always on a reach - more than make up for it. And besides, catamarans don't heel.

A week gives you enough time to get in some wonderful sailing, but if you can stretch it to 10 days to three weeks, you'll have a chance to see the interior of Belize, too. You should begin your trip by flying into Belize City and then hopping on a small plane to Ambergris Caye, to pick up your boat. The flight to Ambergris Caye alone is reason enough to visit Belize, as you gaze far below at the many-colored reef and three of only four coral atolls in the Western Hemisphere - Turneffe Islands and Lighthouse and Glovers Reefs.